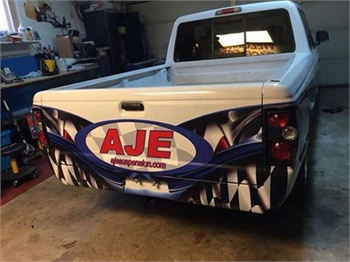 Hi, I’m Anthony Jones founder of AJE. My experience started in 1971 when I hired into Cummins Engine Company. I started on the head assembly line, and then moved to the engine assembly line. In 1972, I moved into the Engineering department. I serviced there until my retirement in 2001. I held many different jobs while in Engineering, but the more notable ones were in 1978 when I worked on the cylinder heads for the b-series engine: that is now in the Dodge pickup, Case International tractors, and many other automotive and industrial applications. In 1985 I was on the design team that installed the B-series engine in the Dodge pickup. In 1995 I moved to Customer Engineering, at that time my job was to do all automotive engine installations from pickups to Class 8 trucks.

In 1990 AJE was born! While I was still at Cummins we started with our wheelie bars then added the access doors. After building our tube chassis, 1990 Mustang Super Gas car we introduced the AJE tube chassis struts. In October 1993 we received a sn95 Mustang from Ford and built another Super Gas tube chassis car. This car was featured in numerous magazines and received a Best Engineered Award. Then we introduce the window net kits and in 1998 we released our 2″ dropped spindled strut assembly for the Mustangs. After the Mustang struts, we felt a need for a new k-member design, so in 1999 we came out with the Y2K-Member.

Now we have front-end kits for Mustangs, Camaros, Chevyll, Firebirds, Mopars, Thunderbirds, 83-97 Ranger and 53-96 F100/F150 Trucks. With our commitment to quality parts others will be added! We believe in customer service so if you ever have any problems with our product please contact us at 800-877-7233.